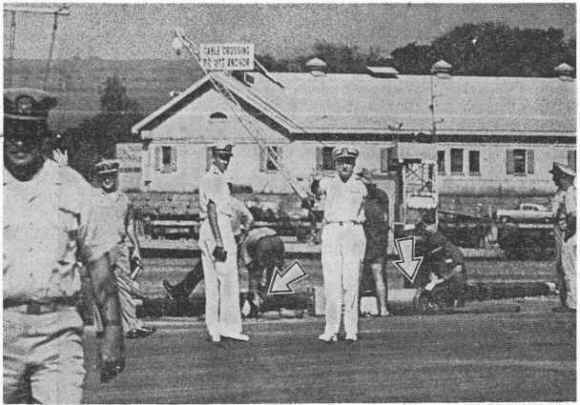 Rear Admiral Henry S. Persons, 14th Naval District Commandant, warns onlookers to keep away. Bending over the halves of the torpedo, indicated by arrows, are Navy ordnance specialists who later deactivated it.

A live torpedo was mistakenly fired onto a Pearl Harbor pier today but it was quickly deactivated while Navy onlookers held their teeth.

The light green-colored torpedo was fired at 8:45 a.m. from a tube on the guided missile destroyer Goldsborough which was tied up at the dock at the time.

For an hour and 20 minutes the situation was tense.

But bomb disposal experts walked up and looked it over, then removed the detonator that could have triggered an explosion.

Before the primer was removed sailors took cover behind cars or anything they could find and Navy police and Shipyard civilian police cleared the area.

The small anti-submarine warfare torpedo broke into two pieces after the firing, one the warhead, the other the driving mechanism or motor.

Before the primer was removed the Goldsborough backed off from the area, pier Mike Two, and moved a short distance away to the Bravo docks close to the Nimitz main gate at the shipyard.The aircraft tender Currituck also cleared the area.

A Navy spokesman for the 14th Naval District said the torpedo was fired “inadvertently.”

An investigation was expected to begin shortly.

The torpedo never hit the water.

The torpedo pieces were loaded onto a barge and taken to the Naval Ammunition Depot. It took about three minutes to detach the primer,a witness said.

The Goldsborough is a Pearl Harbor- stationed member of Destroyer Flotilla Five.

It is one of the Navy’s newest ships, built at Seattle.

The first bomb disposal men at the scene were Lieutenant B. A. Kreusch, and two first class petty officers, J. E. Potts and E. R. Lavallee from the Bryce Canyon.

Wednesday – 24 November 1965
A torpedo, with an explosive warhead, was fired from a moored ship onto a Pearl Harbor pier this morning. The Navy said it was “fired inadvertently.” The ship, the new guided missile destroyer Goldsborough, was quickly moved into the water away from the pier Mike Two, sailors and others on the docks were cleared away in a hurry.

The Navy said the torpedo broke into two pieces on landing on the pier. One piece contained the warhead, the other the propelling engine. Navy bomb specialists were rushed to the scene to try to disarm it. One group was the Navy’s regular Disposal Ordnance Unit No. 1, stationed at Barber’s Point, the other a group of ordinance specialists from the destroyer Tender Bryce Canyon tied up at Ford Island.

The torpedo was fired shortly before 9 a.m., the Navy said. The Goldsborough was moored at Mike Two at the time. This isn’t too far from Nimitz Gate, the main entrance to the Navy Yard. The first ordnance specialist cautiously approached the broken torpedo at midmorning. Then he and the other demolition men huddled at a safe distance to lay plans for disarming. Armed Navy police and Pearl Harbor civilian police kept onlookers out of the area. Another destroyer was moved away from a near by berth.
The Navy said the disposal men hoped to remove the warhead’s primer, rendering it safe for removal by barge to the Naval Ammunition Depot.

The Goldsborough is permanently stationed at Pearl Harbor as a member of Destroyer Flotilla Five. It is one of the newest destroyer types in the Navy.

See “Who pushed the Button” for more from Richard Grant.