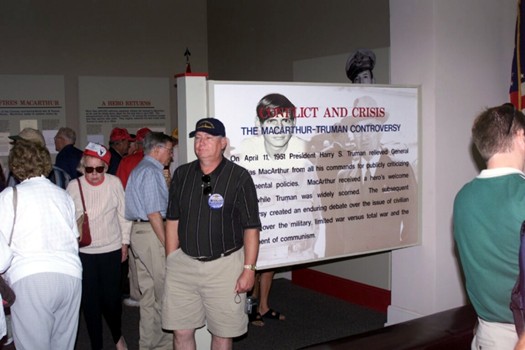 From the Association President:

Monday tours included a walking tour of Colonial Williamsburg followed by free time for shopping and lunch and a visit to Jamestown Island. Enroute to Jamestown Island, we rode along the scenic Colonial Parkway. Jamestown is the original site of the first permanent English settlement. Jamestown was settled in 1607. Archeological digs are ongoing and were observed by many of our attendees.

Tuesday morning our bus tour included the Norfolk Naval station and the city of Norfolk. The afternoon tours included a visit to the National Maritime Center (NAUTICUS) and the battle ship WISCONSIN (BB-64).

Wednesday September 11 was our free day. Pat Taylor led a short memorial service at 0900, remembering the sacrifices made the year before. Many members watched special TV reports in the hospitality room.

After the ceremony, many of the ladies took advantage of the time for shopping. Shipmates enjoyed the day fishing, sightseeing and just relaxing in the hospitality room and catching up on “sea stories”.

During the business meeting Wednesday evening, it was decided to have the 2003 reunion with the TIN CAN SAILORS. The reunion will be in Portland, Oregon August 24-28, 2003. Watch the web site for further information.

Thursday was a very full day. We visited the General MacArthur Memorial. The tour begins with a short film on the General’s career. The memorial includes a museum, gift shop, and the General’s final resting place. Lunch cruise on the “Spirit of Norfolk” included a delicious buffet, entertainment, and a harbor tour. The harbor tour took us along the waterfront where we saw many sights including numerous NAVY ships at the Naval Station.

On Thursday evening, the banquet began with the Pledge of Allegiance led by Chip Chapin, a moment of silence, and reading of the names of deceased SHIPMATES by Jim Haag. The caterer provided a sumptuous buffet for our banquet. Captain Rentz was our speaker for the evening.

Our auctioneer, Pat Taylor, once again, not only provided great entertainment, but also raised over $1,800 for the association. PERSONAL NOTE:

I want to personally thank Tom Weaver for his leadership and many hours devoted to making this association a success. From the first day in November 1999 when he and I met in Las Vegas and scribbled a few notes on a cocktail napkin, he eagerly began doing what needed to be done to organize our first reunion. His guidance and contributions contributed significantly to the development of our association by-laws. Without the leadership and direction he provided, we would not enjoy the success we have today. Thanks, Tom “BZ”.