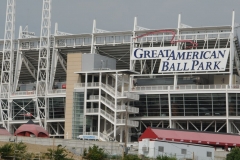 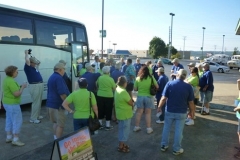 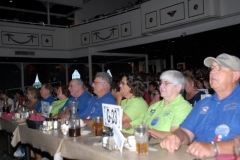 The 2010 USS Goldsborough Association reunion in Branson, which was just completed on August 20th, was indeed one of, if the not the best, reunion ever. Roy and Betty Hoffman did an outstanding job in planning and the host hotel, the Clarion, surpassed our every expectation. The hotel and their staff were beyond belief in how hard they worked to fulfill all our wishes. Of the fifty plus attendees, everyone was thrilled with the reunion and the hotel.

If you ever go to Branson, I strongly suggest the Clarion. Mention you are with the Goldsborough, especially to Joe Cuna the Banquet and Beverage Manager, and then step back and let him do his thing for you. He is an ex-Marine, if there is anyone you can call an ex-Marine, and we made him cry when shipmate Larry Nelson suggested that we give him a picture of the flag raising on Iwo Jima which was auctioned off.

By the way, we took in over $3,000 during the auction and the scholarship fund continues to grow. We presented our first $1,000 scholarship to Brian Biller this year. Please remember, any and all direct descendants of the Goldsborough crew are eligible to apply for a scholarship and details are on the web site.

Branson of course is known for it’s stage shows and there were over fifty to choose from. The variety of shows we attended covered the complete gambit from country to classic. Truly was a fun time and a great reunion.

Roy Hoffman was elected President as my term limits expired as did Vice President Chip Chapin’s. Bob Franklin was chosen to fill the VP position. Betty Hoffman will complete Roy’s secretary term. Good luck to all of them and I am confident they will do a great job.

There were five cities offered as potential sites for the next reunion and the 2011 reunion will be held in the Greater Cincinnati area. The search is on right now for the host hotel and that decison will be made within the next two weeks. Tentative tours are the Air Force Museum with lunch at the Wright-Patterson Air Force Base officers club and a memorial at their chapel. A lunch cruise on a riverboat and of course a short drive to the casinos just across the line in Indiana. There will be other venues and attractions added as plans are finalized.

We are also hoping again to have a pre-reunion activity on Saturday night as we did with the Grand Old Oprie and the Naval Academy Football game in Annapolis. Dates as of now are September 11 to the 15th but again, nothing is presently etched in stone. We hope to have that finalized by mid-September.

Many shipmates invite non-shipmates to the reunion and those people, over the years, have been welcomed with open arms. So feel free to invite your family and friends as the reunions are really a good time for all.

We also voted this year to hold the 2012 reunion in Bremerton, Washington and Shipmate Larry Nelson will coordinate. Larry has been a loyal and generous supporter of the Goldsborough Association for many years and he has volunteered to put on what has to be a great reunion as Larry would not settle for anything less. Larry epitomizes the true character and love for this Associaiton we all should have. God bless you Larry. No one will ever have a truer friend.

It has been my extreme pleasure and an honor to have served as an officer in this Association for nine years. It was indeed a labor of love and one I will miss, but know we are in capable hands to carry on.

I hope many of you will decide to join us in Cincinnati. Please remember, you can come for the entire reunion or a day or two. Whatever your schedule permits, as we are flexible. Some shipmates arrive beginning on Friday and some hang around through the following weekend, so feel free to stop by anytime. The hospitality suite is open to all shipmates and their guests along with all veterans.

Those who attend, be they shipmates, wives, children, parents or just friends, find a group of people who not only have a ship in common but have developed, over the eleven reunions we have hosted, friendships and fellowships with those we served with decades ago. When contacting shipmates, we find some who are not sure they want to bring back that time in their lives. However, those who have had reservations, once on board at a reunion, all trepidation passes and you are immediately surrounded by true friends who cherish the time they get to spend with you. Come to Cincinnati, or any future reunion and see what honor, tradition and loyalty mean so many years after the fact.

God’s speed to all,