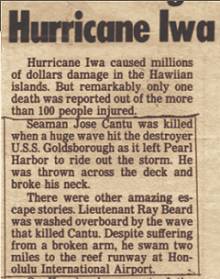 In November 1982 Hurricane Iwa, the worst storm to hit the Hawaiian Islands in over 20 years, caused an estimated $250 million in damage. The storm also claimed one life, that of a seaman aboard the USS Goldsborough.

“I was on board in Nov. 1982. We came home from a West Pac ahead of hurricane Iwa . We were allowed to go home but were called back to the ship. Only half the crew came back, they couldn’t get a hold of the rest, including the doc. We went anyhow, the Captain said “no” the commodore said “go”. We got in the channel and were slammed by a freak wave. It threw the First Lieutenant overboard, and killed a seaman who was TAD. We had to helicopter a doc on board in a hurricane, we used any one we could find for the crash detail. What a ride, we took over 30 degree rolls all night. We had to steer from aft steering all night. We got hit so hard at one point that the fire station portside main deck was bent over so far the hand wheel touched the deck. We had no oxygen or gas bottles left on board and all of are main deck fire hoses were dragging in the water.”
Steve Mclaughlin MR3 82-83